It IS A Challenge

It has been 14 months since I cruised the Mediterranean coast with my friend, Leigh. She had to drag me up hill and down, through towns and villages. I huffed and puffed and grumbled and was a basic pain. I mean, look at those hills and stairs and stuff! 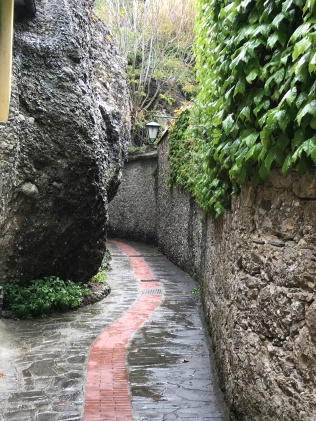 When I got home, I discovered that I had actually LOST weight. I had been eating three meals a day and having desert every night. The only conclusion that I could reach was that all that walking had a beneficial effect.

Then I found a running app for my phone. It started me out slowly–30 second run followed by a 30 second walk. The next step was a 45 second run with a 30 second rest. I got up to running for a few minutes when my feet and knees forced me to stop.

I kept trying to run when my knees felt better but, well, I thought I was doomed to remain at the same weight when someone (I think it was Leigh) suggested swimming.

I checked out local pools. The public ones were not appealing.

So I got a “guest pass” at a gym in the closest town to us. And I went swimming. I ended up joining just so I could swim. I bought a swim bracelet to keep track of my distance and time.

I swam a lot. But nothing was changing except I was tired. And my shoulder started hurting.

Off to the physical therapist. Then back to the pool.

Then the gym had a contest. Join their morning “boot camp” and win MONEY! Not being one to miss such an opportunity, I joined.

Every Tuesday and Thursday I did crunches and pushups. I worked with dumbbells and kettle bells and TRX rings. I produced prodigious amounts of sweat. And I ached.

But I had accepted the challenge. I would not quit. At the end of the month I had won “Most Improved”! I had lost over 20 pounds since I last saw Europe and I was hooked on moving.

My workouts now are recorded on a heart monitor devise that I wear every time I go to the gym. It is an amazing motivator. Just when I think I can’t do anymore, I look at the “live” output that tells me, “yes, you can!”

I get a read-out on just how hard (or not) my heart is working. The yellow is the second hardest workout. Red is the hardest as it is the closest to a maximum heart rate you should get. I don’t get there very often. The yellow on this chart occurred when I was running.

Yes, I am back running. My “boot camp” trainer has been working on getting me to run more efficiently and with a great deal less stress on my knees. And he insists that I go slow. He has me working on my leg strength before every class starts. The result is strong, stable knees. Yipee!!!

Then, a week ago Tuesday, I challenged myself to do a mile on the track. I met the challenge. But I seemed to have hurt my hip. I seemed to have re-ignited my piriformis injury from 20 years ago! No more running until it heals.

So it is back to the pool.

In the last several months I have lost about 4% body fat and added about 4% muscle to my frame. It has not been easy. Getting my self up and out on  workout mornings can be, well, difficult. But I am seeing muscle definition in my arms and legs. And my belly is beginning (ever so slowly) to shrink.

I am beginning to realize that I am not in my forties. I am now a Senior Citizen. That makes it a bit more challenging.

I accepted the challenge!