And Then There Is Marley

Marley is a rather unusual cat. Her story is rather odd.

We (the spouse and I) had gone to the local mega pet store. We needed dog food. Well, puppy food. George and Gracie were still too young for regular dog food. But they were close.

They were a handful. And our Putter did not like them. She had gotten old and her patience with the canine species had stretched thin. 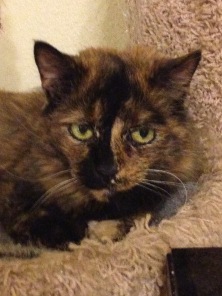 She spent her time in her cat tree near the window in my office. She no longer ventured into the Land of Dog.

As usual, I digress.

The pet store was part of a program from our local college for the adoption of relinquished cats. Once a week the students would bring adoptable cats to the store in hopes that they would be adopted.

We usually stopped to look but this time we had made a pact that there would be no new animals. The pups were keeping us really busy and Putter (we thought) would not be happy with more creatures.

But to get to the dog food that we needed, we had to walk by the glass enclosures where the cats were located. (ok, there were other ways to get there but…)

We picked up the dog food. Picked up some cat litter for Putter. Strolled past the cat enclosure and BAM! That cat hit the glass, paws up and crying. Mind you, Spouse is well in front of me. The cat was after HIM!!

Spouse did stop and talk to the cat, tell her that we couldn’t take her. With a heavy sigh, he walked away.

“We can’t have another cat right now. It wouldn’t be fair to Putter.”

“A cat might get on the kitchen counters. Putter never leaves the office”

These were some of the comments as we trudged to the car with our purchases. I started the car as Spouse shut his door.

“That is a beautiful cat,” he said.

I turned off the car. We went back in.

When they opened the door for the “face-to-face” meeting of human and feline, the cat RAN in and jumped into Spouse’s lap. She ignored me.

And she came home with us. 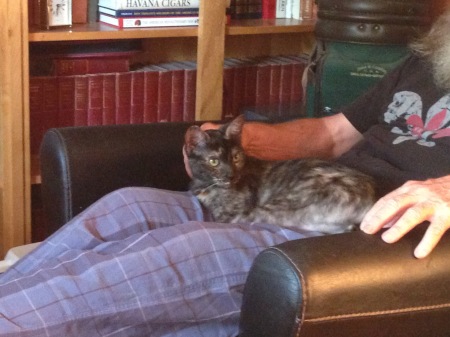 Marley and her HOOMAN

She faced Putter and, although never fully accepted, she maintained a working with relationship with the elder cat. 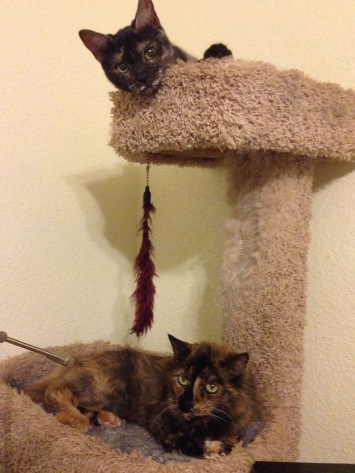 She took over the puppy bed. 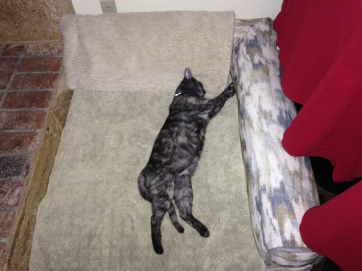 Her biggest quirk? Crinkly anything. Paper, plastic, foil. If it crinkles, she will be chewing on it. Not eating it. Making it crinkle.

Crinkly things are most often found on countertops. NOOOOO!!!!

I have given up the countertop fight. Not because I like a cat on the countertop but because she only gets on the countertop if there is something there that will crinkle. She eschews any human food. The butter can stay out. She has no interest. Left-overs need not be addressed immediately as they do not crinkle.

But give her a potato bag? She is in feline heaven. 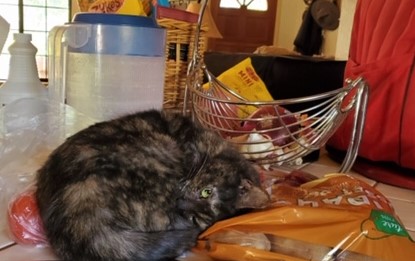 She still ignores me, though.