Being Noticed at Two Hundred

Edward Bransfield died in obscurity. Of all the Antarctic explorers he was the one that no one knew.

But he started it all.

He was the one that saw, mapped and charted the Seventh Continent for the first time.

For three years, the Remembering Edward Bransfield Committee met to figure out ways to get his name out. They raised money and hoped to have a monument to Edward Bransfield built in his hometown of Ballinacurra, County Cork, Ireland.

His story, told to me by Jim Wilson, on the Island Sky during the crossing of the Drake Passage started me on a journey that continues to get better every day. His story began the story of the tartan. His story led me to the Green Isle to celebrate the man.

The day started off with rain. Not in sheets but enough to keep people away and soak those who came. But just as we arrived in Ballinacurra, it stopped. The skies threatened but no drops fell. And people came.

From all over the world.

To be there at the unveiling of the monument honoring Edward Bransfield and the work that he did.

There were admirals and locals, photographer and descendants. Even a color guard. 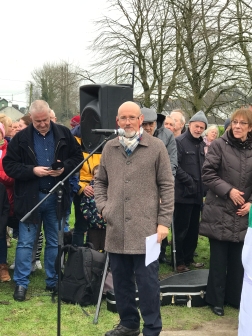 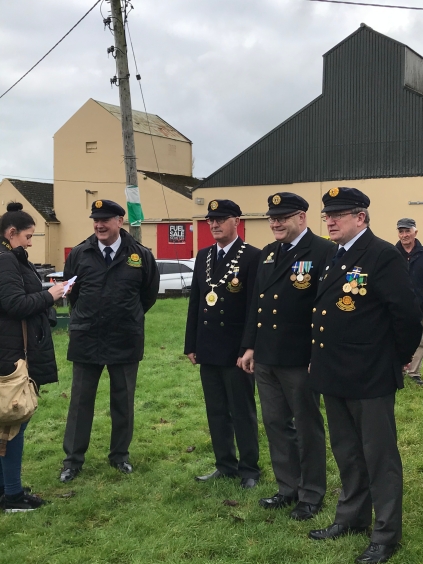 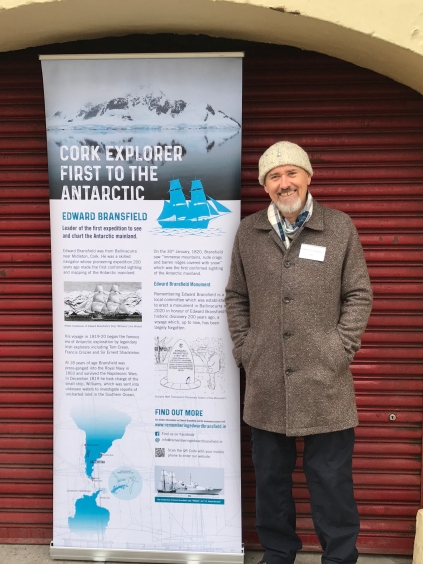 The descendants gathered. The dignitaries spoke. Songs were sung. And the large crowd reveled in the thought that one of their own was finally, finally being recognized for the monumental thing that he did.

His expedition to the southern waters ended without the loss of one life. It ended without a major catastrophe. But before it returned to northern shores the discovery was captured in the words of  Midshipman  Charles Poynter as written in his diary:

‘At 3 our notice was arrested by Three very large Icebergs and 20 minutes after we were unexpectedly astonished by the discovery of land SbW — We continued however to stand on, when at 4 the haze partially clearing away we found ourselves half encompassed with Islands spreading themselves from NE to East between two of these we could perceive a range of Breakers in contact with each and immediately after this was discernable a high and rude range running in a NE and SW direction the centre of it bearing SE 6 or 7 Miles — a steep and roundish Island about 5 Miles distant SSW and a small circular Island SSW ½ W — the whole of these formed a Prospect not easily described and our apprehensions were not a little encreased (sic) by becoming re-immersed in fog and in a situation we knew not Where — Altho’ a great part appeared to join still we were not able with certainty to determine it,1 so unaccomodating was the Atmosphere but by setting the Land WSW at Noon proved we were engulphed but whether by Islands or the Main [still] remained to be determined — On sounding we struck bottom with 80 fathoms of line Coarse black sand & rocky —Our theme of conversation was the Idea of having by the direction the land took found what might possibly lead to the discovering of the long-contested existance (sic) of a Southern Continent’.

And what a day.

Kudos to the Remembering Edward Bransfield Committee and their chairman, Jim Wilson. (Yeah, that guy!) And kudos to Mathew Thompson, the sculptor of the monument. Simple and spectacular.

Should you wish to see the video of the day and you have Facebook access, head to the Remembering Edward Bransfield page. Tony Whelen put together a fabulous short film.

Oh, did you notice all the blue and white scarves? I thought you might.