A couple of years ago, when I had just started weaving, a friend told me that he and his wife were having a baby. It was a great day for them and my weaving instructor thought I might learn something from making a baby blanket.

For this little project she let me purchase a “kit”. No designing or figuring out the sett or any of those myriad of details. Just dress the loom and weave. The object was to get me to pay attention to how I dressed the loom. It was also a lesson in not wasting thread.

And it turned out pretty good for a first attempt.

Then, somewhere along the line, there was a baby boom.

I decided to design a blanket and see what I could do with it. With no expectations as to gender, I was free to pick colors that might or might not be in a traditional “baby blanket”.

Here was my first attempt.

I used acrylic yarn with a solid warp and a variegated weft. The pattern was a simple waffle weave.

What I didn’t consider (having not been around babies for a VERY long time) was that the blanket was heavy. It is actually a crib blanket for a toddler. But it washes well and the pattern is easily repeated. It also worked well as an outdoor wrap (or so I had been told)

So I thought I would repeat it for the next kid. And I was having so much fun weaving it that I forgot I was suppose to make TWO blankets on the length of warp that I had. I loved the colors and just kept going. It became a couch throw!

But not to be daunted, I tried again.

No variegated yarn. This couple were sailors. Their theme was nautical. So the warp was navy and white. The weft had just a touch of pink. And I stopped when I was suppose to stop.

All in all I have made about 5 of these. I must admit that I missed taking photos of a couple but I think you get the idea. 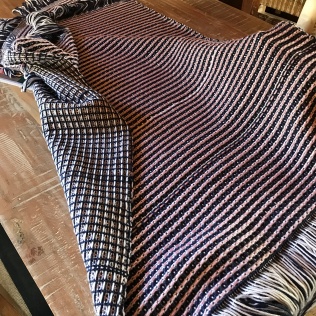 I have two more on the loom and can’t wait to see how these colors look.