I don’t look my age. I never have.

When I was 13, the waiter at a high class restaurant suggested an alcoholic drink to me. I was with my parents and my brothers. I thought my mother was going to have a screaming fit. Instead she hissed, “She is only 13”.

When I was 18 my dinner companions, all 21 years of age, were afraid to go to a certain restaurant as it was famous for carding (checking the ID’s) of its younger looking patrons. My friends were afraid I would be the cause of them being booted from the premises. We went anyway. They were carded. The waiter looked at me and, as I fumbled with my purse, said, “Your ok. Its the rest of these youngsters that worry me.”

When I exceeded middle age, the magic worked in reverse. My retirement was a total surprise to many colleagues. Most thought I was maybe in my late 40’s. Few believed that I had reached retirement age. Fewer still believed that I had a child in her 40’s. It helped that the child was infected with the same age defying gene.

It didn’t take long, after the retirement, for me to discover that age defying gene or not, my physical plant needed help.

The knees began to ache. The pant size went up. The mental acuity had few, if any challenges. I refused to buy anything that would count my steps. I knew that would be close to zero.

Then a friend took me on a trip around the Mediterranean. I had a LOT of trouble getting myself up and down hills that wouldn’t have bothered me a few years before. 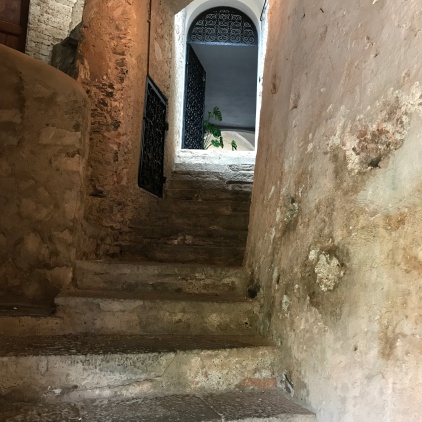 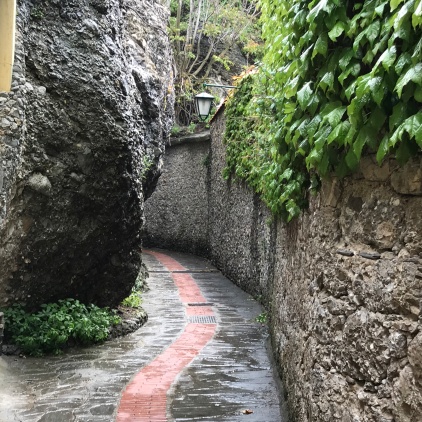 As you can see, there were lots of stairs and upward paths. They went up to the sky and then some. I climbed them but with a lot of huffing and puffing and general declarations on the futility of life. (some blue words escaped my lips, ooops!) But my friend insisted and so I continued.

The more I climbed the more I realized that I needed to start moving at home.

And that is the short version of why  I joined a local gym.

I have always loved swimming so I started with that. A 7:30am 800 meter swim.

But body was not responding as well as I thought it should. The fitness director (a woman I knew from my lawyer days and her county analyst days) suggested I enroll in a competitive “boot camp” class.

She knew me well. Just tell me I can’t do it, and it will get done.

Six weeks later I won the prize for most improved boot camper!

The next month, there was a new (non-competitive) boot camp. I signed up. I keep signing up. Every month.

That fitness bug that people talk about? I was infected. Twice a week I  and my partners in sweat, lift weights, do push-ups and crunches. We do things called “Superman” or “hip dips”. There are AMRAPS and TABATAS. There is a vicious little piece of equipment called a TRX. And a tricky little thing called a BOSU.

I purchased a heart monitor thingy to see if I was pushing myself as much as I thought I was. I compete with it to get my heart rate up and not exceed my medical recommendations.

To date, 25 pounds have left my frame. And my muscle mass has vastly increased. I have been showing off my triceps. My jeans are a little tighter in the thigh. A little looser in the waist.

Yesterday, I took both our full trash cans (those big hunky 70 gallon things you see on the side of country roads once a week) to their pick-up point and unloaded them from the truck. By myself.

Gotta tell ya, this infection is worth it.