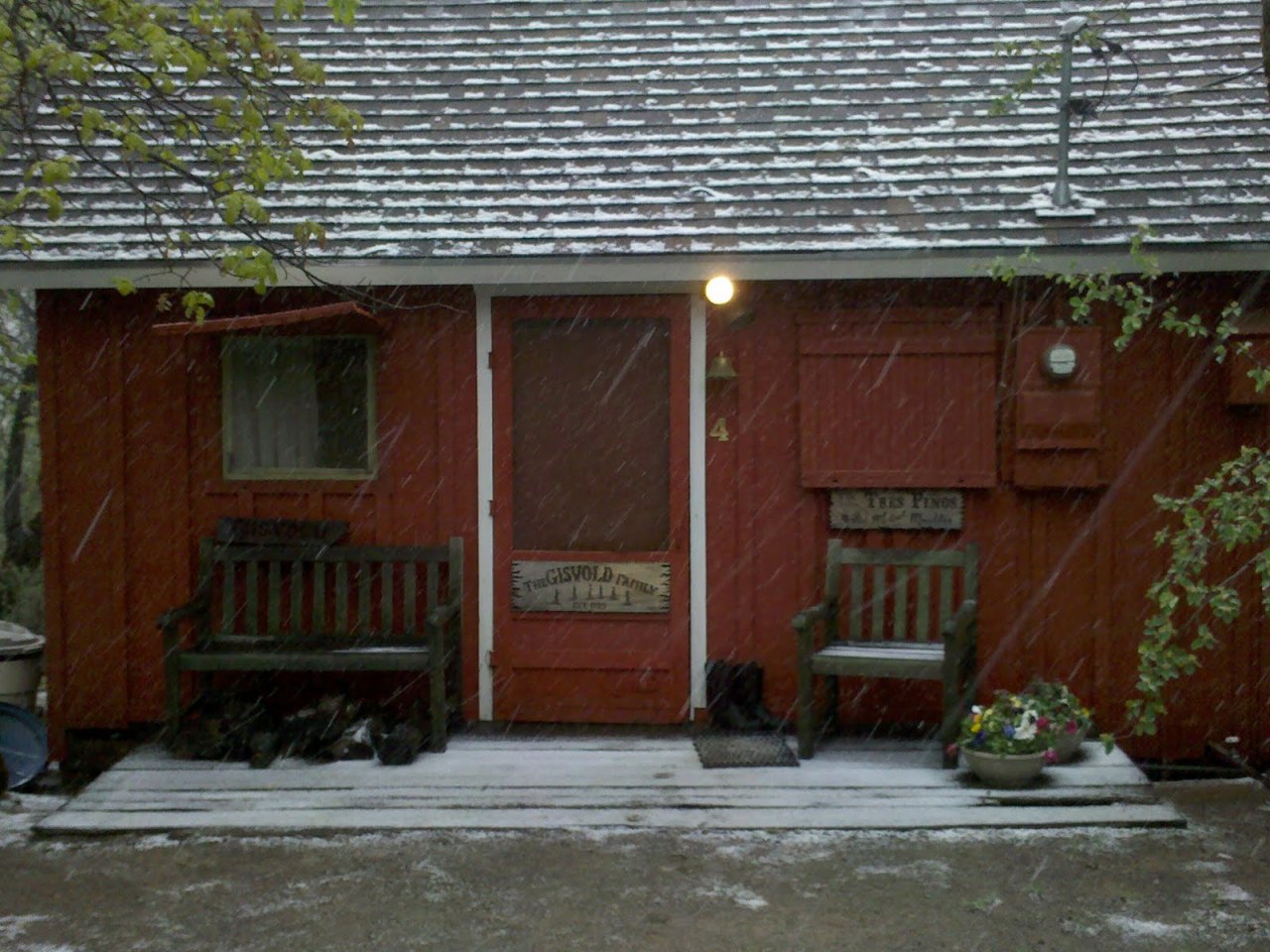 The cabin was built in 1923 by my great-grandparents. It is where they went every summer to escape the heat of the Central Valley.

It was a Cabin. With a capital “C”. One room, a wood stove for cooking and heating, a kitchen sink and cupboards with curtains (no doors). There was running water from a spring. My mother spent summers at the cabin with her grandmother when she was a child.

There have been a few upgrades. It has electricity. It has indoor plumbing. It now has a bedroom and a separate kitchen.  All the comforts of home. Except there is no television, no radio, and, until recently, no phone. There is no such thing as cell service.

The place is stocked with very old books, picture albums of the family, fishing poles, flashlights and mouse traps. There is a granite rock fire circle in the front yard.

It is a place of refuge.

And it was (and still is) hospitable. My memories are of family and friends sitting on the back deck in overstuffed rockers or lounging on outdoor beds that were covered in blankets, sleeping bags, pillows and detritus of overhanging Cedars and Ponderosa pines.

Growing up, the summer days were spent swimming in the river or hiking to the redwood forests. Early evenings were spent fishing. Fish bite at dusk, so dinner wasn’t started until the fishermen returned with their catch.

Summer nights were spent outside around a campfire. Usually it was at our cabin. Or we would go next door to the Ferguson’s. All the people on the lane would come, with their chairs, as soon as the fire was lit.

My father would sing and we all joined in–“There’s a Long, Long Trail”, “Irish Rose”, “Skip to My Lou” and, just for my brother, “Danny Boy”.

My father’s voice would rise to the heavens. Clear and pure. The fire would crackle and, occasionally a log would crumble sending red and yellow sparks skyward. Marshmallows would be roasted (or burned). S’Mores were assembled and devoured.

As the fire reduced to embers. We would grow quiet. We would listen to the fire and the trees and the river. The stars would make a blanket of silver over our heads. The moon would rise over the crest of Slate Mountain as people drifted off to their cabins.

There were people that still live in my memory. Ann Patterson in this picture with her grandchildren and my daughter.

Ann was a fisherwoman. She had spent most of summers at her cabin which was next to ours. In her 90’s she complained that it was getting harder for her to get up to her cabin from the river. So she would take a bota bag of wine with her.  For energy, she said!

Ally and Tom Ferguson. Our neighbors and the best friends of my great-grandparents. 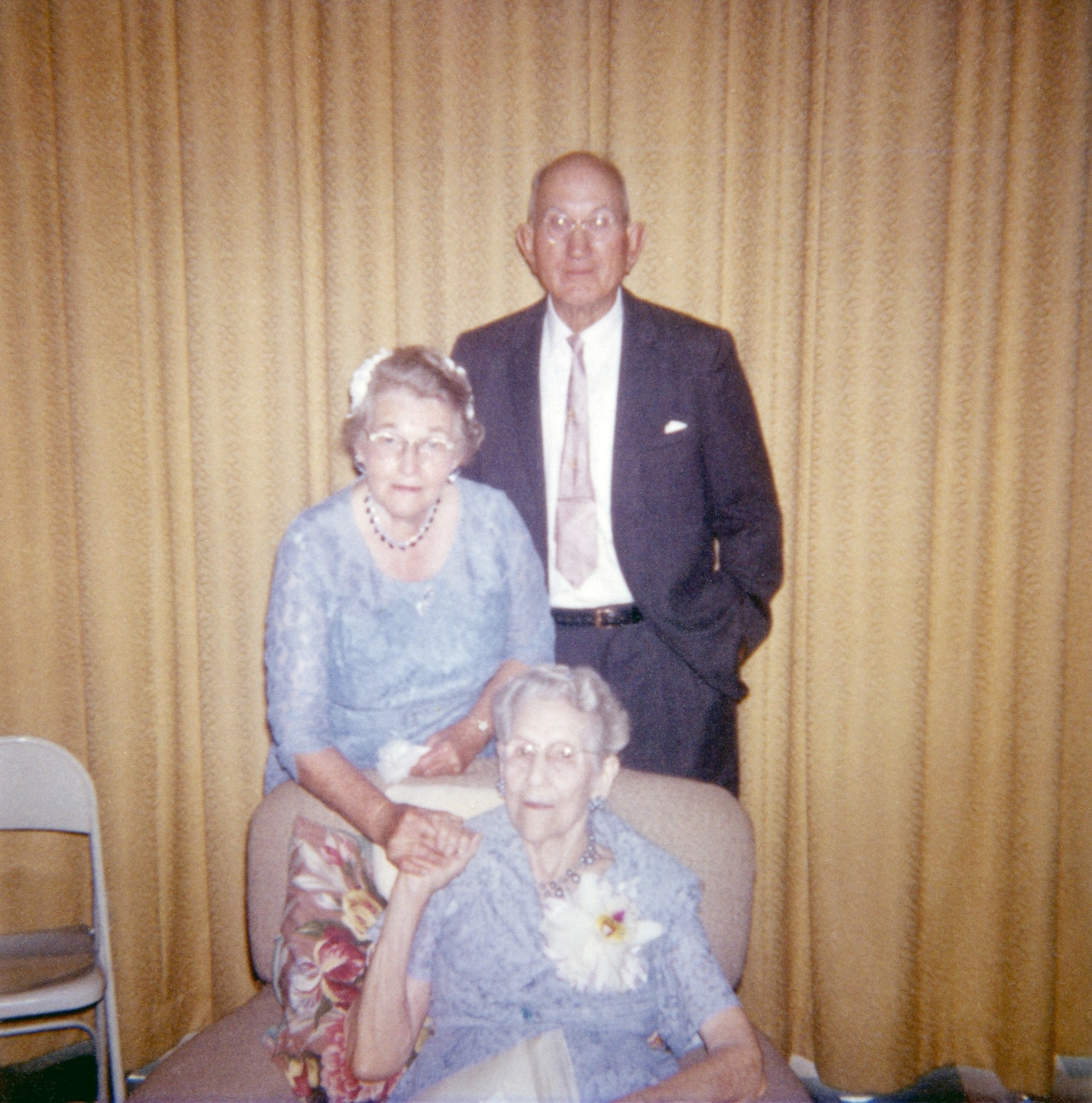 Alice and Tom Ferguson with Barbara Flynn (my great-grandmother) on her 100 birthday!

There was always family.

There was room for everyone. Hanging on the wall was a wooden plague that read:

You are welcome here,
Be at your ease.
Get up when you’re ready,
Go to bed when you please.

We’re happy to share with you
Such as we’ve got,
The leaks in the roof
And the soup in the pot.

You don’t have to thank us
Or laugh at our jokes,
Sit deep and come often…
You’re one of the folks! — Unknown

The plaque is still there.