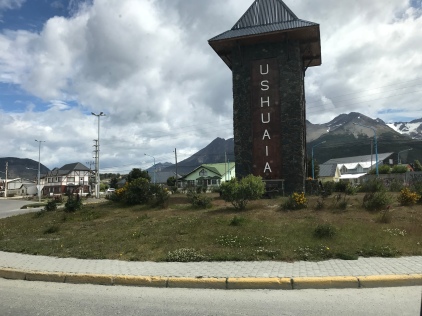 It has been almost a year since the sight of the Southern Andes mountains took my breath away. It feels like yesterday and it feels like a thousand years ago. I know it was not a dream but it was a dream come true. I remember thinking that nothing could be more astoundingly beautiful than the sights that I saw that first day in Ushuaia, Argentina.

The next day I boarded the Island Sky with my dear friend, Leigh. Our expectations were exceeded almost immediately. A bright greeting from the expedition specialists and crew. The most memorable of them by an Irish lad by the name of Jim Wilson.

To say I learned a lot from this man would be the understatement of the year. He joyously informed everyone of the birds, whales flora and fauna that abounded in that stark, immense place. He introduced all of us to the history of Antarctica and its discoverer, Edward Bransfield.

Of all of us standing on the deck at Brown Station, he was the one that got the picture of the out-of-place King penguin. He willingly shared that photograph with me.

When Orca whales were spotted and the ship drifted with them, it was Jim who noted an anomaly and from the deck began jumping up and down yelling, “Minke, minke, minke.” Minke whale are not suppose to travel with Orcas. Minkes generally are an appetizer for Orcas. Except for Type B Orcas. That was the first time I knew that there were several species of Orca. Who knew??? Jim Wilson did.

Because of his jumping and yelling, I was able to get an amazing photo. My own picture of a whale’s tale.

That picture is now on the wall of my home. Every day it reminds me of the precious Earth and our responsibility to it.

But the most amazing thing that happened was on our return to Argentina. On the bulletin board there was a piece of cloth. An official tartan (meaning it was registered with the Scottish Register of Tartans in Scotland). As a weaver, I had to examine this item. I wondered if I could weave that pattern.

As I found out, I couldn’t. Not without getting permission from the person or persons who had registered the design.

That is when dear Mr. Wilson planted the idea of me weaving my own tartan.

And so the journey to the End of the World, that had started over a week before, became a journey into tartans.

I have told the story before. (Head to my blog category of weaving for the story of the process.) What I did not expect was that the project would take SOOOO long. Granted, I could only work on it for three hours once a week during my weaving class. Granted, I missed a few weeks. (Like I went to Spain. That story is under the category of singing!) 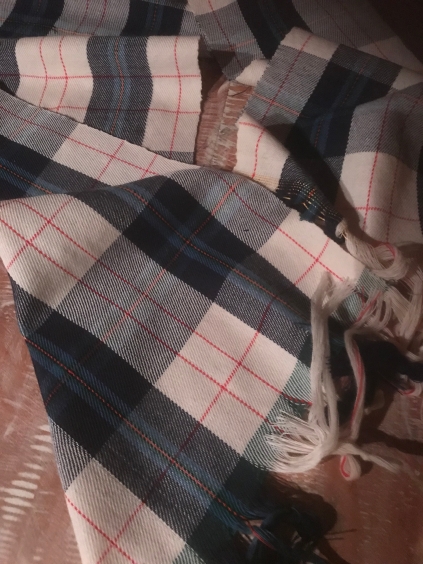 Fresh off the loom, the fringe is tied so there is less tangling during the wet finishing  process.

I am so proud to be part of the recognition of that man of exploration.

To all on the Remembering Edward Bransfield Committee, I thank you. This has been a wonderful journey. (and, yes, I will post a picture of the finished scarf!)