Just in case you have been living under a rock or otherwise too occupied to follow every move that my dogs make (on my blog which is, of course, the most important thing in the whole wide world…;-) ), I will explain the situation. First, there is a very large, fenced in dog area behind our home. We built it so that the dogs would have lots of territory in which to run and explore. The chief occupation of Gracie has been lizard hunting while George preferred to take his ball and quietly explore the regions covered with sage/chemise. 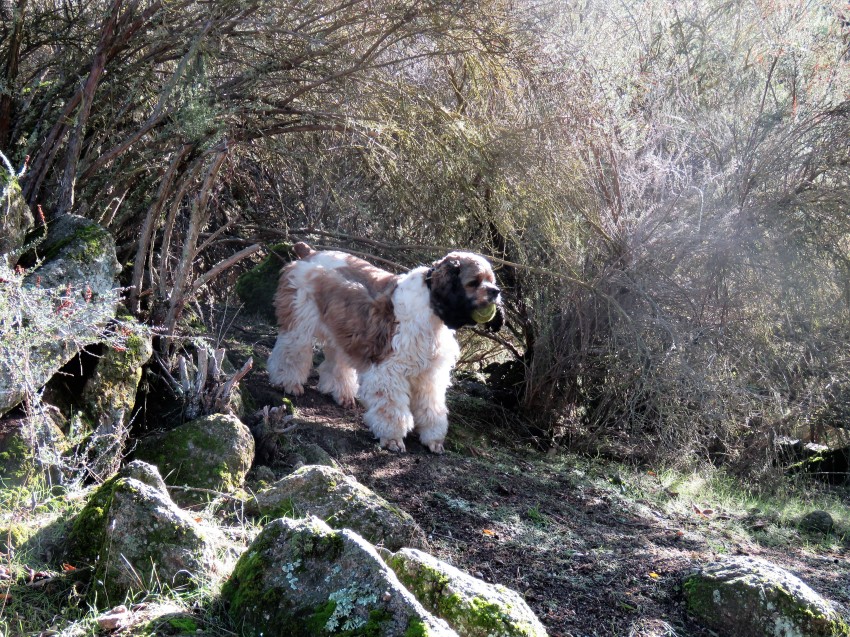 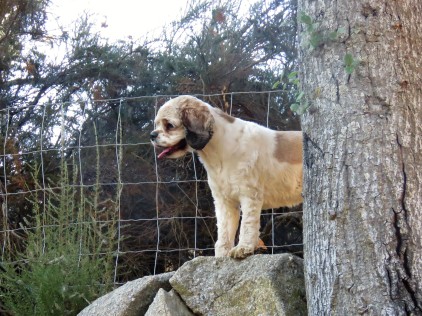 Lately, both dogs have had an attraction for the chemise covered area which is in the far back of the dog run. Being curious, I finally walked up the hill and peeked around the corner and saw both dogs sniffing the ground and rubbing their heads where they had sniffed. I called them and they both came to me acting as if nothing unusual had happened.

Odd I thought and then forgot about it.

Then, a couple of days ago they did the same behavior, sniffing and rubbing their heads where they had sniffed, in the front yard. I could see nothing on the ground where they had performed these rituals. I saw nothing out of the ordinary.

I assumed that the neighbors dogs had trespassed again but I could not smell anything untoward on my dogs. Again, I forgot about it.

Then George left his ball on the ground and went sniffing. This was significant. I could not figure out why he would leave his beloved ball anywhere, for any reason. I began to think the unthinkable, was George outgrowing his tennis ball??

Then, tonight, my spouse told me that he had been outside after dark with his trusty flashlight and caught something out of the corner of his eye. A flash of something. Training his light in the proper direction he made eye contact with a California Grey Fox. She was drinking from one of our bird baths.

According to my research (quick, down and dirty type) the grey fox lives (among other places) in the chaparral of California where most of the rainfall is in the winter, while the summers are hot and dry. Its den sites are made in rock formations, hollow logs and trees, burrows and brush piles. The dens are often lined with grass and leaves. Some dens may be located 30 ft above the ground as the California Grey Fox can climb trees!

Guess what we have just above the dog run?

A large granite outcropping suitable for fox housekeeping. There are numerous trees nearby to allowing climbing for defensive purposes and plenty of rabbit warrens to plunder.

The first year that we lived in this remote paradise, we saw an incredible sight. A mother California Grey fox had brought her kits down to the area that is now the dog run and sat as the little ones played in the sun. We watched from inside the house, afraid that if we moved they would scatter in fear. Luckily, our dogs at the time (Mohawk, LadyBug, and Zelda) were too old to care and remained asleep on their beds the entire time.

The California Grey Fox is said to mate for life. The male is territorial and the family usually stays were it is raised. Lack of water and food can move them but it is thought that they return when those circumstances change.

And they have changed here in the high desert chaparral. There have been two consecutive wet winters. The rabbit population has exploded as has the reproduction of squirrel, moles, voles, gophers and chipmunks. The fox menu has greatly expanded.

Since the grey fox is thought to live between 5-7 years, we think this particular one is one of the kits we saw almost 7 years ago. That thought, whether true or not, makes me feel warm and cozy inside.

This Grey Fox is welcome.

And now I know what George and Gracie were doing!